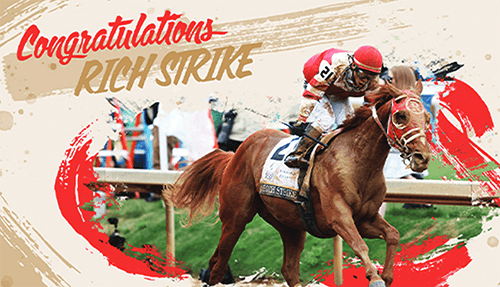 In the May 7th Saturday race at Churchill Downs, Rich Strike, which closed at 80-1 odds — the longest of any horse in the field of 20 — won by 3/4 of a length over Epicenter and third-place finisher Zandon. It was the second-largest upset in the race’s history Saturday. Rich Strike’s team won $1.86 million of the Derby’s $3 million purse. The only time a horse overcame longer odds to win the race was in 1913, when Donerail triumphed after closing as a 91-1 longshot. Rich Strike was only added to the field Friday after Ethereal Road dropped out.

The colt was an even bigger underdog in Las Vegas, where some sports books had him as long as 300-1. Former President Donald Trump was among the spectators, becoming the first former president to attend the Kentucky Derby since 2000, when George H.W. Bush attended. Former President Richard Nixon is the only president to attend the race while in office, watching in 1969 when Majestic Prince won.