Cotton Rosser was a legend in the rodeo world, who brought new showmanship to the sport as he operated the Flying U Rodeo Ranch.

Cotton passed away at his home in Marysville, California at the age of 93.

A life in rodeo 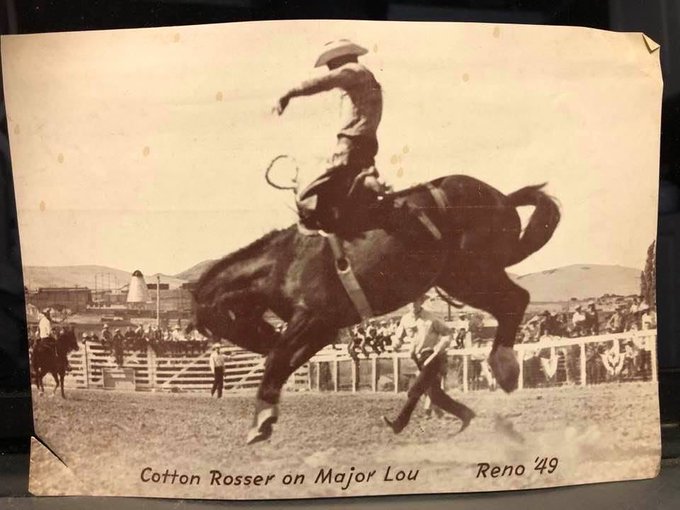 Rosser began his life in rodeo as a competitor, and he was a champion saddle bronc rider in the 1950s. After a ranch accident, he ended his competition career but remained an integral part of the rodeo world all his life. In 1956, Rosser bought the Flying U Rodeo Ranch, building it to become one of the most prominent suppliers of rodeo animals and the oldest rodeo livestock company in the U.S. He also worked to raise the profile of rodeo, becoming known for his showmanship in rodeo opening ceremonies. Especially known for his work at the Reno Rodeo, Rosser was honored with a statue outside the arena there. In 1995, Rosser was inducted into the ProRodeo Hall of Fame, and in 2019, he was honored with the Hall of Fame’s annual Legends of ProRodeo award.

Notable quote, “I never imagined my rodeo career would be like this. I’m the richest guy in the world with memories and friends. I’ve loved every minute of the rodeo business and I would do it all over again. It has been a great experience.” —from a 2019 interview for ProRodeo Sports.

On July 19 in Marysville, CA, over 2,000 folks came from near and very far to honor Cotton by paying their final respects. This was in addition to the tens of thousands people viewing the real-time complete coverage on RFD TV’s cowboy channel. The first words that were spoken expressed the directive of Karin and the Rosser family that, “Today is not a funeral, it is in fact a celebration of Cotton’s 93-plus years of a truly great life. Time to be only a little sad, gratefully glad, joyful, as well as hand claps, wild applause, oh mys, real laughter, tears and cheers!”

The venue for this extraordinary celebration was the newly completed Hard Rock Hotel and Casino at Fire Mountain, located just south of the Flying U headquarters and Cotton’s “born to buck” horse pasture.

From a typical summer sweltering 105-plus degree afternoon, attendees walked into Hard Rock with cool, fresh 75 degree-air into a cutting edge event center where every seat had an unobstructed view of the stage, three huge high definition video and photo screens with a sound system that even those with impaired hearing could hear.

True to Cotton’s traditions, the memorial started with a flag presentation by the military color guard from Beale Air Force Base, and an uplifting National Anthem. To conclude an inspiring three-hour tribute was the playing of “Happy Trails” and the family invited everyone to enjoy fellowship and refreshments served in the huge hospitality room.
Among the many industry recognitions, Cotton was voted the 1997 California Livestock Man Of The Year!

“King of the Cowboys”

Cotton was a multi-event superstar who helped put the storied Cal Poly Rodeo tradition on the map. He was the first of three generations of Rosser family Mustangs, and bled green and gold all his life. It was fitting that Cotton—who was awarded an honorary doctorate degree from his beloved alma mater—lived to see this spring’s dedication of the Cotton Rosser Rodeo Complex at Cal Poly in San Luis Obispo.

“I owe everything to Cal Poly, and have used the Mustangs motto of ‘Learn by Doing’ all my life,” Cotton always said. “When I got hurt and couldn’t compete anymore, I learned by doing when it 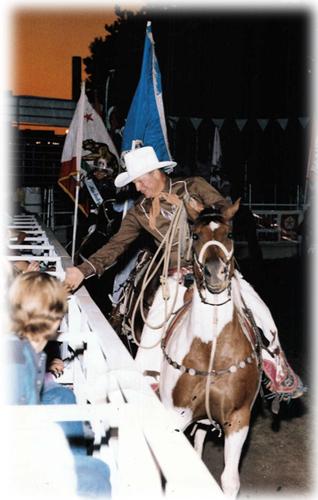 came to the rodeo production business.”

While attending college on California’s Central Coast in the late 1940s and early ’50s, Cotton took to the professional rodeo trail. One of his favorite traveling partners was area rancher and ProRodeo Hall of Fame all-around cowboy Gene Rambo, who sometimes entered Cotton for half when he was making due on a college-cowboy budget.

One of Cotton’s proudest cowboy accomplishments was when he won the all-around championship for Cal Poly at the 1951 College National Finals Rodeo at San Francisco’s Cow Palace, where he went on to host crowds comprised largely of city folks for over 60 years at the Grand National Livestock Exposition, Horse Show & Rodeo.

Cotton’s competitive days were cut short in 1955, when at 27 he suffered a catastrophic, career-ending injury from a run-in with a post-hole auger while building an arena on the home ranch in Marysville. He suffered compound fractures to both legs. Both of Cotton’s ankles were crushed, along with his competitive dreams. But Cotton being Cotton, he found a way to turn tragedy into triumph. In 1956, he and a partner bought the Flying U Rodeo Company.

“That accident was the best thing that ever happened to me,” Cotton said of the silver lining. “My competitive cowboy days were over, but not my love of rodeo. I looked at it as a blessing. I would have went on and rodeoed. Instead, I got into management and putting on the shows.”

Cotton Rosser rodeo productions were world renowned, and landed him and his family the job of producing the openings at the first 10 National Finals Rodeos held in Las Vegas, starting in 1985. Whether it was Old Glory rising up out of a super-sized boot, or dropping her down into the arena by parachute from a plane high in the sky, Cotton’s creative flair was one of a kind.
“That’s like winning the all-around for me, and I couldn’t have won it if I’d been a rodeo hand,” Cotton said at the time. “I might have had a gold buckle, but I wouldn’t have lived the life I have and met the people I’ve met. When I look at the men who’ve been honored before me—Ronald Reagan and Dwight Eisenhower—it’s the greatest thing. This is tall cotton for me. What a great honor.”>