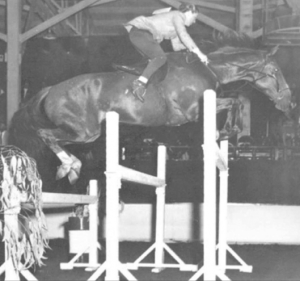 When I was a child my home backed up to the Cow Palace parking lot in San Francisco, California. Or to be specific, Daly City. I lived there most of my childhood. The Cow Palace was the greatest place in the world when it came to great horse events. There were all kinds of Horse Shows and of course the Grand National Livestock and Rodeo every October. I don’t believe my parent’s or I ever bought me a ticket to see an event there. I just simply scooted under the chain-link fence and saundered on in. I looked all the horses over and dreamed of owning one myself one day. This is where my love for horses began and my respect for those that rode and showed them in all manner of events.

But one of my favorite events was the championship hunter/jumper shows of which there were many back then. The Cow Palace was probably the most famous of all event centers for these types of events on the west coast back then, from about the late 40’s through the 60’s the place was always packed but I always had a favorite spot to watch from and it was a place that no one but me and maybe one of my childhood friends would dare to go. The rafters where they stored all kinds of stuff up high, there was always a wooden ladder that took us to the best seat in the house! This ability to attend these great shows also gave me the chance to get to know the heroes and winners of that great era.

Barbara Worth was the star rider everyone came to watch then, she was amazing. A rather small woman who had such a command of the competition she rode in. She never disappointed anyone, she won almost all the time. She and her great mounts made some breath-taking rides as she flew effortlessly over the jumps in speedy time and excellent form. She is my hero and I will never forgot where my love of horses first came from, no it wasn’t TV as I don’t believe my family owned one at the time. The smell of the Cow Palace and all the livestock are still part of
my memory and I so enjoyed the Rodeos and the excitement that it brought to my neighborhood every year. But I have to say the time I spent watching Barbara Worth take the jumps was the most incredible memory I will ever have. Later on I would grow up and show horses myself and at one of the shows I was competing at, for some reason I am not aware of, Barbara was there sitting in the bleachers watching and they announced her presence. I for a moment got to meet this great lady and I told her how much she meant to me and for my love of horses and the show world.

This month we celebrate great women in history and I had to include this accomplished lady equestrian because I think she deserves to be remembered and honored. Sharon DeCarlo, Editor Barbara Worth Oakford dedicated her life to the world of horse shows, and especially to show jumpers. She began riding in 1924. In 1927, at age 14, she opened her own hunter-jumper training business. She soon became an elite competitor which she remained for over forty years. Oakford’s training barn was the cornerstone of West Coast horse shows for many years. During World War II, she and her clients traveled as extensively as gasoline rationing permitted, determined to keep horse shows from canceling.

During Oakford’s many years of competition, it was common for her to win the top three, four, or five awards in jumper classes. She was also a highly respected American Horse Show Association (AHSA) registered judge. Among the horses Oakford developed were several worldclass jumpers purchased by John Galvin and loaned to the USET. Perhaps the most famous was Snowbound, ridden by Bill Steinkraus to the individual Gold Medal at the 1968 Olympic Games in Mexico City. Balbriggan, who won championships from coast to coast for 15 years, was another outstanding Oakford-trained horse.

In 1946, Oakford and other horse show industry leaders founded the Pacific Coast Horse Shows Association, of which she remained an Honorary Director into the 1990s. From 1959 to 1983, she captained the Barbara Worth Good Seat and Hands Medal competition, the first ever jumper-type equitation class, whose year-end championship winners include Mary Maris (Chapot), Susan Hutchison, Hap Hansen, and Anne Kursinski. Barbara was named Horsewoman of the Year by three different associations: the AHSA (1962); the California All Breeds Award  Association (1971); and the California Professional Horsemen’s Association (1977). She was also honored with a 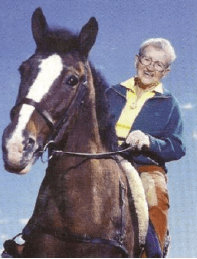 California State Legislature Assembly Resolution and with Certificates of Commendation from the California Chamber of Commerce and State Fair Board of Directors.

Although her earliest memories no doubt turned to her father’s mules, west coast horsemen will never forget Barbara Worth’s accomplishments with horses. Horses of all kinds, huge jumpers like the unforgettable 18 hand Balbriggan, and horses smaller in stature but not in fame such as the legend, and foundation of legends, Poco Lena. Barbara was born in 1913, the daughter of a mule skinner, at the Sunny Bank Farm in Nicholas, CA. It has been said that her father could drive up to 28 mules on a jerk line, while riding the left wheel mule. At four Barbara was riding her own mule to school. At six, she was putting together her own teams of ponies, pulling her wagon behind her father’s larger freight wagons. Sometimes she would crawl in her wagon and sleep while her pony hitch followed along behind her father. The Great Depression brought hard times to her family as it did to all. Forced to sell part of their ranch, her parents chose to divorce. Barbara’s show winnings, even as a young girl, helped support her mother, until she remarried longtime horseshoer and friend, Bert Brown.

Barbara continued showing, and during the depression she brought her winnings home to help support the family.  These earnings were compliled from every event she could enter; hunter/jumpers, polo horses, stock horses, 3 and 5 gaited horses, western pleasure, western riding, trail horses and endurance horses. Since her step father’s horse budget limited out at $200, Barbara was winning on horses that others had passed over because of lameness or attitude problems. An example was a horse named Frank Fallon. She found him at a horse show, when he flipped upon his rider, creating quite a scene. She knew an opportunity when she saw one, and promptly purchased him for the grand total of $225. When she got the horse home she found his mouth had been wired shut, and then wired to a standing martingale and caveson. His ears were so full of warts he could hardly accept the bridle. With care and patience, Frank Fallon became one of the most famous hunter/jumpers of all time. Barbara rode him for 11 years and when retired, he was considered the best conformation hunter in the nation.

As Barbara Worth grew into adulthood, she was a successful owner of her own stables and after a short courtship, she became the wife of fellow trainer Charlie Zimmerman. Charlie was dashing and appealing to judges and Barbara’s students. He took over lessons, and trained along side Barbara. Soon differences became apparent. He liked horses that fit his style, so the others went to Barbara. This was not a problem for her however, as she trained to suit the horse, and she was the one who was winning. World War II entered the picture and Zimmerman enlisted, hoping to make officer and become the commandant of the horse training facility at Fort Riley, KS. Barbara went to visit and stayed on for a time training horses and recruits, as well as riding Olympics mounts. Upon her return to California she continued to show, adding dressage, reiners, steeplechase, and hackney ponies to her resume.

Eventually Zimmerman returned to California, but their differences drove them apart. When the Cow Palace was built, Barbara and her horse Balbriggan made the jump-offs against the same rider 5 years in a row. She met a fellow named Don Dodge. In a new era, Dodge and Barbara married. During their time together they owned and showed such industry legends as Poco Lena, Snipper W, Tivio Bar, and Mona Lisa. Although their marriage lasted only 8 years they remained friends for life. Barbara eventually married one more time, and her union with Bill Oakford lasted over 3 decades. They were together to the end. During her incredible career, Barbara Worth was: Horsewoman of the Year in 1962, All Breeds Awards Association Horsewoman of the Year in 1971, subject of the Pacific Coast’s Horse Shows Association  video “‘A Tribute to Barbara Worth”‘ in 1994, and was inducted into The Show Jumping Hall of Fame in 1994. She truly “‘won it all”‘. In her day, only cavalry men were allowed to ride in the Olympics, or perhaps a Gold Medal would have been part of her legacy as well.

What is the history of Women History Month?

Women’s History Month can trace its origins to a small-town school event in Sonoma, California, in 1978. That year, presentations were given at dozens of schools, hundreds of students participated in a “Real Woman” essay contest and a parade was held in downtown Santa Rosa.