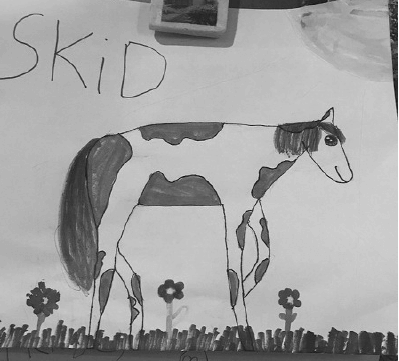 One of the scariest things for kids is when they fall off the horse. And rightfully so. Sometimes the fall is a plop to the ground, a slide off the saddle, a bit of a launching in the air, or some dramatic aerial where the kids actually land on their feet. And, then of course there are the more serious ones where injury occurs. While I have seen all of the above, it is a shaky moment for any student regardless of the type of fall. We have all heard that you have to get back in the saddle. This is true. But beyond just getting back in the saddle there are some steps the rider has to take to regain their confidence.

Inevitably when the student does get back in the saddle they are still experiencing some level of fear. This is natural. What else is natural, is the fact that the horse is picking up on that fear and in turn responding to it on some level; potentially making matters worse. It is a cycle that looks something like this: the student falls and is apprehensive about getting back in the saddle but does it; the horse senses a change in the rider and responds to the riders internal anxiety in one way or another; the student reacts to the horse by grabbing a tighter hold of the reins as that ball of anxious energy inside the student is transferred to the horse; thus making the horse a little nuttier; and the cycle continues. That is, until the student learns how to control the fear while regaining their confidence.

Again, it is not enough to say get back in the saddle. There is more to deal with here. And once dealt with properly the student has the potential to become a far better rider than they were before the fall. Once the first fall occurs several things can happen. The student will quit riding or make excuses why she can no longer ride; the student becomes a reluctant rider where fear becomes her constant riding partner; or she becomes a better rider because she has committed to moving beyond the fear by taking the necessary steps to do so. In my experiences the kids I work with choose to commit to carry on in a confident manner.

Recently, a student of mine, Dani, (11) had her first fall and off of her favorite horse Skid. She and I had talked about Skid previously and I reminded her that she had to remain alert and confident because although Skid is a very good horse, she also needs to know that the rider is a capable leader and one she can trust. To which Dani responded with the typical kid “yesses” while reminding me how much she loved Skid and how cute she was.

As it happened Dani was happily going around the arena when a big snow truck drove by. As Dani moved her horse to the center of the arena she (Dani) began to panic at the site of the truck. This in turn caused Skid to spook a bit and pick up a lope. This startled Dani who in turn abruptly yanked on her reins causing Skid to crow hop and ultimately pop Dani out of the saddle and onto the ground! While the fall wasn’t bad the feeling that lingered after the fall was what she struggled with most. Her confident ride changed to a very apprehensive ride. It is not enough to say “suck it up”, “cowboy up” and all of that business; but rather it is key to teach the student how to meet fear head on and work through it in an effort to move beyond it. It is foolish to assume that just
because the student is in the saddle that the problem is solved. It is not. As was evident when Dani got back in the saddle. But rather than give up or settle for riding with fear, Dani did a brilliant 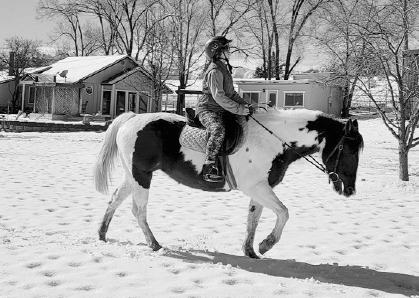 job in identifying her feelings as she began her ride. The following are the steps Dani took to regain her confidence. 1) Know what you’re dealing with. In this case the thought of getting back on the horse and riding created instant anxiety. 2) Know how to handle the anxiety. She learned to take deep breaths in and big blowing breaths out, which reduced her internal anxiety as evidenced when Skid dropped her head. 3) Know why you are getting back in the saddle. Dani knew that quitting was never an option because of her love for riding and in particular her love of Skid. This “why” outweighed any fear. 4) Know that there is always help. With solid coaching Dani was able to move through her experience. In fact her ride for the rest of the morning was some of the best riding I have seen Dani do. 5) Know that between now and the next ride, you may experience some anxiety. This is normal. By letting students know this is normal, they instantly feel better.

With these tools in hand Dani was not only able to regain her confidence that morning but she now has some tools which will aide her in upcoming rides. “I learned I needed to roll with it when Skid began to lope verses panicking. Accepting the fact that much of the problem was rider error, I learned how not to panic, how to take deep breaths, and when to whoa my horse when I need to regroup. Quitting is not an option and Miss Kim was very helpful because she didn’t get emotional when I fell off. She just helped me without any drama. That helped me regain my confidence. After she knew I was ok she made me laugh which is always a good thing.” (Dani, age 11). Unfortunately fear has a way of setting up shop inside of us if we let it. Whether it is riding or something else in life, it is important to face fear head on verses letting it take center stage in your life.

Kim Chappell, M.Ed., Instructor and Equine-Facilitated Life Coach. For further information on programs, riding programs, and Equine-facilitated life coaching, you can contact Kim at  kkc827@aol.com or go to www.chappellranchllc.com