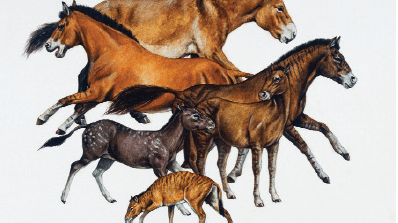 2. The caballine or “stout-legged horse” belonging to the genus Equus, and Haringtonhippus Francisco, the “stiltlegged horse.” Recent studies of ancient DNA suggest that the North American
caballine horses included the ancestor of the modern horse.

3. At the end of the Last Glacial Period, the non-caballines went extinct and the caballines were extirpated from Americas. Multiple factors that included changing climate and the impact of newly arrived human hunters may have been to blame. Thus, before the Columbian Exchange, the youngest physical evidence (macrofossils-generally bones or teeth) for the survival of Equids in the Americas dates between 10,500 and 7,600 years before present.

4. Modern horses were first brought to the Americas with the Conquistadors, beginning with Columbus, who imported horses from Spain to the West Indies on his second voyage in 1493. Horses came to the mainland with the arrival of Cortes in 1519.

5. Horse breeding in sufficient numbers to establish a self-sustaining population developed in what today is the southwestern United States starting in 1598 when Juan de Onate founded Santa Fe Nuevo Mexico. From 75 horses in his original expedition, he expanded his herd to 800, and from there the horse population increased rapidly. 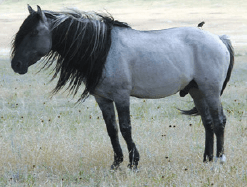 7. In the west, the first known sighting of a free-roaming horse was in the Great Basin and it was John Bidwell near the Humboldt Sinks in 1841. Although John Charles Fremont noted thousands of horses in California, the only horse sign he spoke of in the Great Basin, (which he named) was tracks around Pyramid Lake, and the natives he encountered there were horseless.

8. In the early 1900s, thousands of freeroaming horses were rounded up for use in the Spanish-American War and World War I by the US Calvary and the Military.

9. By 1920, Bob Brislawn, who worked as a packer for the U. S. government, recognized that the original mustangs were disappearing, and made efforts to preserve them, ultimately establishing
the Spanish Mustang Registry. In 1934, J. Frank Dobie stated that there were just “a few wild (feral) horses in Nevada, Wyoming and other Western states” and that “only a trace of Spanish blood” is left in most of them remaining.

10. By 1950s, the mustang population dropped to an estimated 25,000 horses. Abuses linked to certain capture methods, including hunting from airplanes and poisoning water holes, led to the
first federal free-roaming horse protection law in 1959.

11. The popular name was “Wild Horse Annie Act” and it provided for protection of certain previously established herds of horses and burros. It mandated the Bureau of Land Management to oversee the protection and management of free-roaming herds on lands it administered and gave U.S. Forest Service similar authority on National Forest lands. A few free-ranging horses are
also managed by the United States Fish and Wildlife Services.