“Her majesty took my breath away. As the ocean air blew her long wavy mane wildly in the wind, she stood tall and proud, head held high as she inhaled the salty air. In an instant she was gone racing across the open pasture, sharp snorts followed by hoof-to-hoof prancing as she tasted freedom. Her silhouette filled the evening sky.” I was not in the market for a horse but friends of mine told me about this little Morgan mare who was for sale. After a lot of pestering from them, I reluctantly drove 2 hours to go see her. When I arrived, I was not immediately impressed for she was low headed, dull in the eye, and simply had no life to her. While her owners fed and cared for her and were well intended they thought of her more as a pet. A pet that was trapped in a 12×16
paddock where she spent most of her days with the occasional turnout in a round pen. She was 5-years-old. A long time to be in a paddock. A captive with no hope. Resignation hung around her
neck like a shabby sign. And yet her crooked face, incurred by an injury as a weanling when another horse stepped on her, spoke to me. I could not pull myself away from this little mare who stood so quietly, without life, as I “inspected” her.

As I stroked her neck one more time before leaving something in my heart twisted. The 2 hour drive home went by in no time at all, as my thoughts were filled with images of this little mare. That evening I did some research on her bloodlines and I realized that she had remarkable lineage in terms of old Morgan blood. While that is all well and good, there was something beyond the paperwork that kept nagging at me. It was the life blood oozing out of her and a spirit dying on the vine that kept me awake that night. So I brought her home for a 2 week trial period and as each day passed she woke up more and more.

“Again I gasped at her beauty as she pranced in the fading light, the sun dipping below the horizon on the ocean.” When I called the next day to give them my offer, the owners had a change of 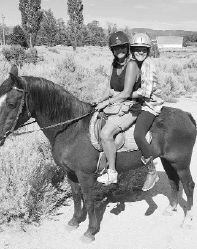 heart because they couldn’t let go of their pet. Although I upped the price, they still refused. When I upped it again, the answer was a firm NO. I stood in the driveway as they loaded her up, and I felt that twist in my heart, as I stood in the morning ocean fog watching the last of the tail lights fade away. Tears filled my eyes and dropped ever so slowly like intermittent heavy rain drops. And that was it. She was gone. Eight months had passed when completely out of the blue I received a call. It was the owners of the Morgan mare calling to ask if I was still interested in buying her as they could no longer take care of her. Without a moments hesitation I said yes, and left the next day to pick her up before they changed their minds again.

As I unloaded her and set her free in the pasture, I could tell she remembered. Her snort was loud, her hooves danced on the wet earth, she rolled and rolled in joy blanketing herself in dirt, and then off she ran… free… really free… and home. Our adventures began and boy did we have some! She was my faithful friend who carried me in good times and in bad for 19 years; and if I ever trusted a horse to keep me safe, I trusted her.

She was the Queen. And everyone knew it. I spoiled her horribly which is atypical for me, but I did it. She roamed around at will wherever she wanted and I let her. She was always the first to be fed, because she demanded it and I obliged. And she was always the first of my horses to greet me and I delighted in it. She had been struggling in the last year of her life after an illness had gotten the best of her. The vet and I tried everything to get her over the hump and although we had small successes the toll on her body was evident. In her last months, she took to standing quietly out in pasture facing the house. It was a troublesome time for both her and I because the end was near, and a letting go was happening between us. She would stare at me across the pasture and I would stand quietly watching her, working things out in my mind, and wondering how do I say good-bye to my trusted friend. 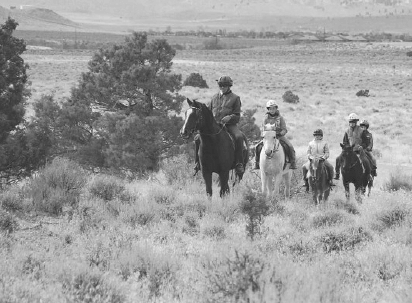 In her last days, I held her head in my arms, laid my forehead on hers, and whispered, “You can go.” As I stroked her neck one more time before leaving something in my heart twisted. When I came home later that morning she was gone. That night I had a very vivid dream in which she came to me. She was robust, strong, her body dappled and shimmering in the light. She dropped her hip low to the ground so I could get on her with my bum knee, and off we went into the far beyond. Once in a blue moon you have a horse unlike any other. She was that horse to me. (Morgan Mare passed in September 2018)