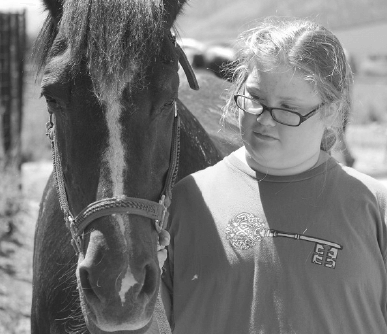 “The greatest discovery of my generation is that human beings can alter their lives by altering their attitudes of mind.” – William James

Attitude is everything. When I think of leadership and the characteristics of leadership, attitude is top on the list. Your attitude is your personal philosophy in life and it seems that all other  leadership characteristics fall under this umbrella. We know we have to be strong, confident, capable, responsible leaders when we work with our horses (and in life in general), but without the right attitude (or personal philosophy), how can we sustain these other leadership characteristics if our attitude is weak, sketchy, or inconsistent. I dare say we can’t for very long. Attitude is the main ingredient that gives strength to everything else. In my horse camps leadership, and how to develop stronger leadership skills, is the topic. Horse’s look for a leader, they need a leader, and without one the rider is at the mercy of the horse. Good leadership is the key to good horsemanship. But along with this, one must possess the right attitude, especially when the ride becomes challenging.

Your attitude is a choice and one you actively have to decide on. When things are going great it is easy to have a good attitude. When things go south, it is more challenging to decide who you will be in a given moment. When the going gets tough one’s attitude can start to tank and sink like a boat with a hole in it! I see it with the kids all the time. As their coach and trainer it is my job to help them develop a winning attitude and teach them how to sustain it… especially during difficult times. The following story is a great example of a student who made a CHOICE to change her attitude and in turn achieve her personal best in horse camp.

Ruby is an inspiration to me and to all her fellow riders. In camp this week, I was astounded at the transformation one of my students made seemingly overnight. It was a complete 360 from who 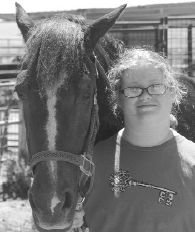 she was on Monday and who she came to camp as on Tuesday, Wednesday, Thursday, and Friday. She had just flown in from Boston to visit her grandparents and to attend horse camp. Monday was a challenging day for her, meeting new people, being a beginner horseback rider among novice riders, having a coach, and just being the new kid on the block. She was easily discouraged and would give up far too quickly. This was challenging for me as I tried to connect with her, but in the end it seemed she just wanted to be left alone, although I continued to encourage and support her efforts.

Later that day I pondered how I might be able to reach her so that her experience in the camp could be rewarding and joyous. I thought about the different approaches I could take and what I could say. I reflected on her first day and recalled how she hung back with Morgan, her horse, as we dismounted and tied up for break. I noticed that rather than scurry off like the rest of the campers, she spent extra time stroking Morgan’s face as the two connected on a deeper level. There was an energetic bond between the two of them that seemed to embed itself in the other. As I reflected further on this, I let the idea of “what to do” go and intuitively sensed this would work itself out.

The next day as Ruby rode, I found myself doing frequent double takes as they trotted by, Morgan in self-carriage and Ruby in correct position. Finally I just had to stop the whole camp to ask with genuine interest, “How are you doing what you are doing? And who are you today? Holy Cow! I don’t ever think I have ever seen Morgan connect so quickly and willingly with any one person. How are you doing that?” To which Ruby shrugged and went on her way, as a small smile crept across her face. As the camp progressed, I continued to marvel at this transformation which seemed so effortless.

As the second day ended, I complimented Ruby on her riding and off she went. On day three of the camp, the connection between Morgan and Ruby was even stronger as they continued to ride in unison. This beginner student of 3 days was creating her own kind of magic. So much so, that I said out loud, “Ruby… You Got Game!” At the end of the camp, I asked her to share her secret regarding how she accomplished such a dramatic change. A bit reticent to tell me verbally, I asked her if she would share it with me in writing and if it would be OK to publish it in this month’s article. “The way I changed between Monday night and Tuesday was that I knew that my performance and attitude was not at the level that I wanted it to be at. I set a goal before the camp that I would try my best to not get annoyed. When I did get annoyed, I was a bit disappointed, not in the horse but in myself. 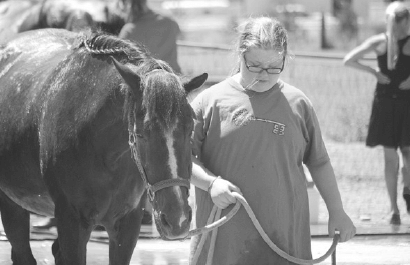 You could say I’m determined if you wanted, I wouldn’t say that myself, but whatever. What I did that night was I told myself, “You flew a 9 hour flight to Nevada to go to a horse camp to have fun. Do you think you are going to have fun when you’re grumpy? No, you won’t. So tomorrow you are going to try hard and have fun.” And I guess that’s what happened and that is how I have a winning attitude.”( Ruby, age 10). This example of attitude in the saddle and out of the saddle, truly illustrates the idea that attitude is everything and that attitude is a choice, not a given. Ruby demonstrated this to the nth degree and I admire her greatly for coming to this realization on her own.

Her ability to learn was there all along but she had to come into the arena in the right frame of mind and with the right attitude. How do you react with your horse when things are not going your way? How do you react in life when things are not going your way? What can you do to change your attitude and in turn change your experience? These are this month’s coaching questions.