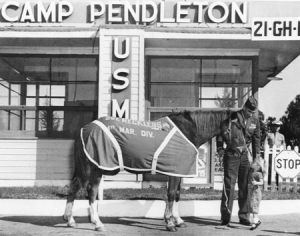 I think I’ve kept you in suspense long enough. The end of 2021 was a challenging one, so here’s to a brighter 2022. To be honest, this was a difficult article to write. By using the “installment” method, I was able to put off the inevitable…until now. This is the final chapter in the life of Sgt. Reckless USMC.

Reckless’ arrival at the base was met with great fanfare. She was greeted at the gate by Camp Boss Major General John T. Sheldon, and then driven to the Ranch House to meet Mrs. Sheldon where it was love at first sight. Reckless of course made her mark in the guest book, but not without Lt. Pedersen’s intervention before she devoured the pen!

Sgt. Reckless was still on active duty and still expected to serve the Marines while at Camp Pendleton, however she was never to be considered an ordinary horse. Therefore Colonel Andrew Geer laid out a list of directives for her care. The list included, but was not limited to; “Nothing other than a blanket was ever to be placed upon her back, she would graze in a commodious pasture with the best greens,and she was to be groomed and inspected with regularity”. Also, as to her preferred delicacies, Geer laid out how often and when she could have Coca-Cola, milk, scrambled eggs and sugar, among other foods.

Colonel Geer also wrote a letter to Marine Corps Commandant Lemuel C. Shepherd, Jr. laying out directives for handling Reckless’ celebrity. Most importantly, she was never to appear on any program that was not dignified, or one that would compromise her integrity as a war heroine. Eventually, Reckless was a popular guest appearing in several parades in 1955, as well as on “Art Linkletter’s House Party” television show. 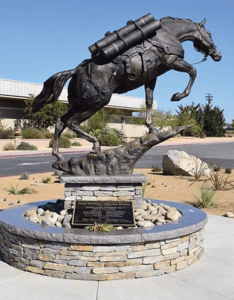 I recently had the privilege of speaking with a retired Marine, Richard Velarde of Stagecoach, NV. Velarde worked with Sgt. Reckless and her foal Fearless, when he was stationed at Camp Pendelton. He reminded me that everything was about perspective. While Geer, Pedersen and other’s might be “horse savvy”, not all Marines were, and at first some didn’t even know who the little “pony” was enclosed in the barbed wire fence, in the parking lot at Camp Pendleton.

Velarde, who took care of the General’s horses, requested of him that a Veterinarian see to the little horse, which turned out to be the famous Korean War heroine Sgt. Reckless. Her teeth needed filing, she needed de-worming, and looked lonely and sad. After she received the much needed attention, she became the darling of the base and all was right in her world once again.

Other “duties” Reckless was obligated to perform included military and civilian parades, and various retirement ceremonies, as well as guest appearances on Armed Forces Day. She also participated in drills like the one in March of 1958 when she, along with nearly 2,400 Marines marched in a 110 mile round-trip hike to Camp Elliot. The only trouble Reckless encountered was when she tried to cross a road rail. She got her front legs over, but could not get her lame hind leg to go over, so she was stuck half-way. Several Marines lifted her front legs back over and she was walked to an opening. However, when eight other Marines in that march dropped out due to various medical problems…Reckless made it the entire way carrying two (empty) artillery casings on her back for show.

Camp Pendleton served the Marines in many ways, but perhaps it never expected to be a “Mare-ternity” Ward. In early spring of 1957 a sign placed on the hill above the camp read “Its a ____”. On April 5th the sign was completed with the word “boy” and with that, Reckless became a mother giving birth to her first colt named “Fearless”.The sign on the hill was eventually extended to read: “Mother and son doing fine.” Reckless would go on to foal three more colts, two of which would live. “Dauntless” was born in 1959, and Chesty was born in 1964. A little filly was born in 1966, but died of unknown causes only one moth later.

During her assignment at Camp Pendleton, Sgt. Reckless was the recipient of two additional promotions. On June 15 of 1959, she was promoted to Staff Sergeant Reckless level E-5. Then, later in 1959 the Marine Corps added two new pay grade levels – E-8 and E-9. With the new structure, Reckless’ level became “Acting Staff Sgt.” and she qualified for a promotion. On August 31,1959, Reckless was promoted to Staff Sergeant E-6. These promotions reflected the genuine respect the Marines had for her.

To show you that the Marines take ranks and tradition into no small consideration, I will share with you that the above promotion of Sgt. Reckless resulted in the removal of Corporal Winters as Reckless’ parade leader, because she now outranked him! A new ranking NCO was found to replace Winters when the Commandant of the Marine Corps, General Randolph McCall Pate was chosen in Winter’s place.

Well, whether we want to admit it or not, we all need to face “retirement”. Reckless’ official retirement was set for November, 10, 1960 – six years to the day after arriving at Camp Pendleton. And Reckless never quit serving….”quit” was not in her vocabulary! She continued to serve in a therapeutic sense to soldiers who had served in war conflicts, and to those headed off to Vietnam. 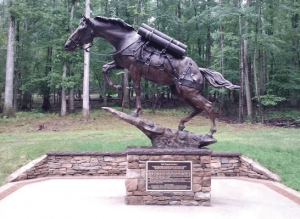 No one lives for ever… not people, not horses. All we can do is acknowledge both for their contributions to our better way of life. According to Reckless’ Veterinarian Dr. Robert L. Miller, Reckless’ final years were plagued with ailments which led indirectly to her demise. In her final years, she suffered from arthritis and lamenitis. Recall this, she had worked hard and long during the battles in Korea and this was her ”reward”.

On May 13 of 1968, Reckless’ aliments, indirectly led to a freak accident. Reckless fell through a barbed wire fence and into a ravine. Although she was rushed to hospital, her injuries proved too severe and her life was humanely ended by Dr. Miller. Reckless was 20 years of age.

Her burial ceremony was a small and somber affair. Care was taken as to where and how she was buried on the Camp Pendelton property, to make sure that she was comfortable in her final rest. It wasn’t until November 20, 1971 that a memorial was erected in her honor. The 1st Marine Division Association dedicated a black granite memorial at the camp’s stables front gate. The memorial includes a picture of Reckless in her parade blanket.

Three more memorials have since been dedicated in Sgt. Reckless’ honor. Two similar sculptures by artist Jocelyn Russell, via tremendous fundraising efforts, are here in the United States. The first of the two was unveiled on July 26, 2013 at Semper Fidelis Memorial Park at National Museum of the Marine Corps. The other was unveiled at Camp Pendleton on October 26, 2016. Both statues depict Reckless in action in Korea. The third memorial was dedicated in 2018 at Yeoncheon Gorangpogu History Park, near Battlefield of Outpost Vegas Battle.

A little Mongolian mare, who started her career as a racehorse, has become the legacy of a true Marine. So let me say, “Sgt. Reckless USMC – I salute you!