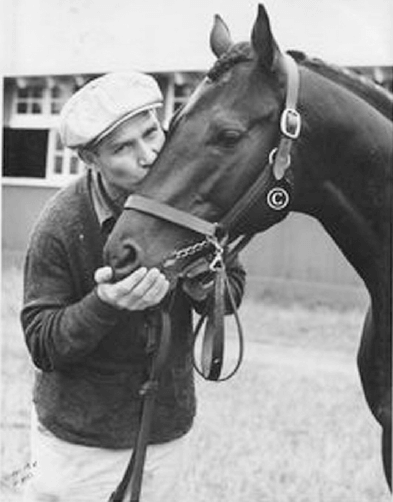 The greatest match race in American Horse Racing History Seabiscuit Versus War Admiral Information compiled from Thom Loverro a Washington, D.C.-based writer “Horse racing was in its  heyday, and Seabiscuit was an enormous cult hero,” said Laura Hillenbrand, author of the bestselling book “Seabiscuit.” “He was the number one newsmaker in 1938, a star with the kind of  magnitude you don’t see today.” This race between two legendary horses was an event for the times, with America trying to climb out of the Great Depression.

“It captured the imagination of the public,” said Edward Bowen, author of “War Admiral.” “It had all kinds of social implications,” he said. “The race gave people a temporary respite from the daily hardships caused by the Great Depression,” said Allan Carter, historian at the National Museum of Racing. Seabiscuit was the underdog, the Cinderella Man of racing. “He was the horse from the other side of the tracks who became a champion,” Hillenbrand said. War Admiral was the regal ruler of racing, the son of the great Man O’War (though Seabiscuit was related as well) who had won racing’s Triple Crown in 1937, an aristocratic horse that seemed unbeatable. Furthermore War Admiral was the favorite of the established East Coast, while Seabiscuit was the upstart from West Coast racing. “It really was a territorial thing,” said horse trainer and racing historian John Shirreffs. “Anything west of the Rockies in those days in racing was not really taken seriously. That helped make this a big national event.”

Match racing between two horses had been common in the 18th and 19th century, it became less common in the 20th century. Still, there were some historic one-on-one races that took place, but none as big as Seabiscuit vs. War Admiral. Seabiscuit, who was also related to Man O’War through his son, Hard Tack, had fallen out of favor with its owners, a lazy, underachieving three-year-old who was pawned off to horse owner Charles Howard for just $8,000 in 1936. Howard hired trainer Tom Smith to work with Seabiscuit, and, as has been well documented in books and film, he and jockey Red Pollard began a remarkable rehabilitation of the previously-disappointing horse. After winning a few races in the East, Howard shipped Seabiscuit out West, where he would become the darling of racing and established his reputation as a winner. He would win 11 of 15 races in 1937 and was leading money winner in horse racing – the same year that War  Admiral was winning the Triple Crown and given the prestigious American Horse of the Year Award. Horse racing dominated the sports pages during this time, and sportswriters began clamoring for a match race between War Admiral and Seabiscuit. “A horse race had the potential to attract a frenzy that would be difficult to imagine today,” Bowen said. “Horse racing occupied a higher place in the public consciousness than it does now. Baseball, boxing and horse racing were the dominant sports of the time. And this horse race had all the ingredients that made a terrific story.”

It had a hero – Seabiscuit – and a villain in War Admiral.  “The media made War Admiral the villain,” Bowen said. “Bob Considine, one of the top sportswriters of his time, wrote an outlandish column that painted War Admiral as a spoiled kid who never had to work hard in his life. It was completely trumped up, but it reflected the image that other people had – that War Admiral was not a true champion. He had a piece of his hoof sliced off in the Belmont Stakes and still won the Triple Crown. He was a very game race horse himself.” His owner, though, Samuel Riddle, was not game for a match race against Seabiscuit. At least not in the beginning. Howard, Smith and Pollard were willing participants, eager for a chance for their horse to go up against the Triple Crown champion. The owner of Pimlico Race Course, home of the Preakness, Alfred Vanderbilt, was eager to host the race.

But Riddle balked several times at attempts to make the match race. “Horse racing in the West was considered second rate,” Hillenbrand said. “War Admiral’s owner did not consider it dignified to have his horse run against a horse like Seabiscuit.” War Admiral did not fare well in starting gates. He hated the contraptions, and cut off a piece of his hoof struggling in the gate coming out of the Belmont Stakes, but was such a great horse, still managed to win the race. If Riddle was going to race his prize horse against Seabiscuit, he wanted it without a starting gate. They would use a bell to start the race, which gave the advantage to War Admiral. He was a speed horse – a fast starter – and the horse that got out front first in these match races often wound up winning. Seabiscuit liked to run with the pack and then take the lead. Remarkably, Smith would change Seabiscuit’s racing style – something very difficult to do to a horse at this stage of their racing career. Secretly, he set up an alarm clock to get Seabiscuit to take off at the sound of a bell, until Seabiscuit became fast right out of the break.

Before the race, Pimlico’s starting bell mysteriously disappeared, so track officials asked Smith if they could use his bell. “No one was ever able to confirm if Tom (Smith) took it,” Hillenbrand said. “But reporters said there was a sparkle in his eye when asked about it.” An important, emotional part of the Seabiscuit story was the rider. In February 1938, his jockey, Red Pollard, fell while riding Fair Knightess, another Howard horse. Pollard suffered chest and rib injuries, along with a broken arm. Howard picked a friend of Pollard’s and a successful jockey, George Woolf, to ride Seabiscuit. It rained in Baltimore in the days leading up to the race, and Seabiscuit did not like muddy tracks. The night before the face, Woolf walked the track in the dark, and found one particular track that was hardened a few feet from the rail. It would be Seabiscuit’s path to victory. 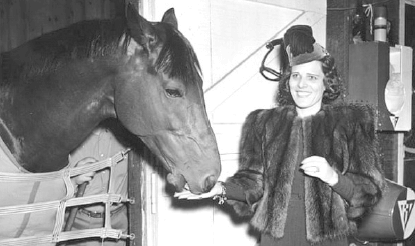 The match race dominated the news leading up to the event. The country awaited the showdown between two great horses. Vanderbilt feared that Pimlico, which could handle a crowd of about 15,000 comfortably, couldn’t handle the crush of people that would want to see the race. So he scheduled it on a Tuesday, figuring the work day would keep the crowd down. But the country stopped for Seabiscuit vs. War Admiral. More than 40,000 people descended on the Baltimore track. An estimated 40 million more – including FDR – were listening on the radio. “They didn’t know what to do with all the people,” Hillenbrand said. “They funneled 10,000 people into the infield. People were hanging from the rafters in the grandstand. Thousands more were outside the track, hanging from trees, standing on rooftops.

All of America was holding its breath for this race.” Hundreds of reporters descended on Pimlico. The track was lined with newsreel cameras. Here is how the legendary Grantland Rice, reported on the race: “A little horse with the heart of a lion and the flying feet of a gazelle yesterday proved his place as the gamest thoroughbred that ever faced over an American track. “In one of the greatest match races ever run in the ancient history of the turf, the valiant Seabiscuit not only conquered the great War Admiral but, beyond this, he ran the beaten son of Man O’War into the dirt and dust of Pimlico…the drama and the melodrama of this match race, held before a record crowd keyed to the highest tension I Seabiscuit gets a carrot from owner Mrs. Charles Howard in Baltimore the day after the big race. Photograph: AP have seen in sport, set an alltime mark.”

On November 1, 1938, the 5-year-old thoroughbred Seabiscuit defeated former Triple Crown champ War Admiral by  four lengths in a match race at Pimlico Race Course in Baltimore. Seabiscuit, who was 2-1 on the board at post time, while War Admiral was 1-to-4 on the board shocked War  Admiral by getting off to a stunningly fast start and wound up winning the race by four lengths, posting a time of 1:56 3/5, breaking the track record. Thousands of fans descended on the track. It was a glorious, historic moment on the American landscape, with each horse playing its part. Seabiscuit was America’s darling, but War Admiral was his dance partner to racing immortality, the two of them stopping the world together on the first day of November in 1938.