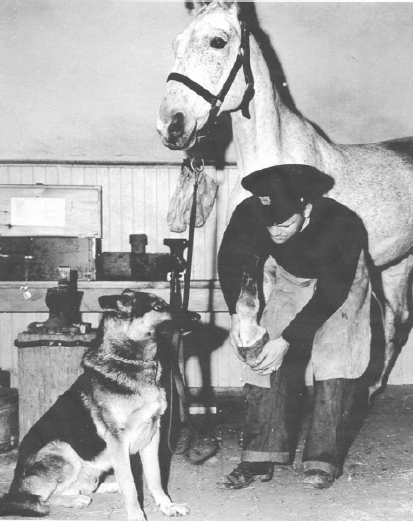 As a youngster in the 1970s, I recall my granddad speaking of individuals he told to “go pound sand!” Well, even I understood it to mean “Get Lost!” Then a few months ago, a friend of mine asked me what I knew about the history of the “Sand Pounders”? Me, I wondered if these individuals were famous for being interlopers and annoying? So, naturally I was intrigued and I had to find out more about these notorious “pounders of sand”.

Imagine my surprise to find this was a little-known military maneuver which took place all along the U.S. coastline, as well as where my own father grew up – on the Pacific Coast in the state of Oregon … and it had to do with horses! During WWII there was understandable concern amongst Americans regarding their coast lines. Beach patrols became increasingly important as they upheld three important functions: they looked out for suspicious ships, they reported and prevented any enemy landings, and stopped communications between ships and people on shore. In 1942, in Florida and New York, two Nazi saboteur teams were discovered being put ashore by German U-boats. Off the Oregon Coast, the enemy was already active sinking merchant ships, shelling Fort Stevens and trying to start forest fires with bombs! Oregonians feared what could happen if a submarine quietly slipped into one of their tiny inlets and sent a few dozen Japanese soldiers ashore. The threat was answered when the U.S. Coast Guard launched the Coast Guard Beach Patrol – which quickly became known as the “Sand Pounders.”

The Sand Pounders patrol was staffed with recruits drawn from both the Midwest and from east of the Cascades which was horse country. Anyone who has ever strolled an empty beach knows, walking isn’t an easy or fast way to cover distance. Then add a 35-pound “portable” radio transmitter that was state-of-theart at that time. Amounted patrol seemed the only viable option. The horses came from the U.S. Army and Army Remount Service who provided all the riding gear, while the Coast Guard provided the uniforms. The patrol was made up of stunt riders, rodeo riders, jockeys, show jumpers, Army Reserve cavalrymen and any other rider to volunteer. In using horses – equipment, radios, and rifles were more easily carried than by a single person, and horses were much faster at running down a suspect. Mounted patrols worked in pairs and often a dog was included in the team. The dogs wore canvas shoes to protect their paws from oyster shells on the beach. Throughout the early war years, the “Sand pounders” carried .38 revolvers and Reising M50 submachine guns.

They were mounted (one with a backpack radio transmitter) and made their way along the beach during every kind of weather the Oregon Coast would produce, ever on the look-out for Japanese submarines. They initially had only the authority to report suspicious occurrences. However, by late summer in 1943, the governors of Oregon and Washington issued a proclamation giving them full lawenforcement authority. Although Sand Pounders did not experience combat action, their job was still very dangerous. They could be swept out to sea if they became too close while rounding one of the capes or outcroppings; patrolmen were frequently soaked up to the bridle in spray from the waves. The horses themselves could be unpredictable. 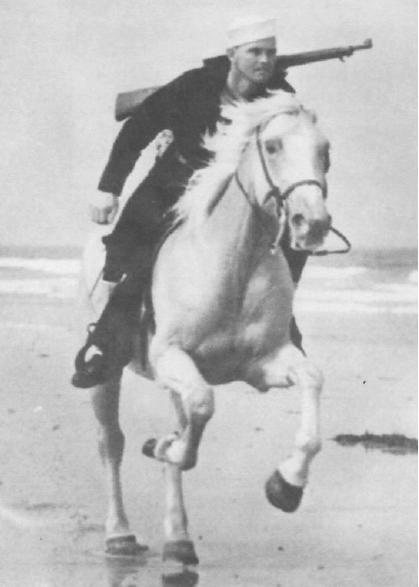 One patrolman was thrown from his horse when he was riding near the Southern Pacific railroad track and the passing engine fired up its boiler burner, startling the horse – which threw the rider and galloped off into the night. A declassified report read: “Despite the many difficulties encountered and overcome, the morale of the men was universally high…Where horses and dogs were used, consideration of the animals was often more important than the comfort of the men. Upon them, as much as upon the welfare of the handlers, depended the sustained vigilance of the patrols…The methodical tramp of weary feet plodding their beats back and forth, amid fair weather and foul, stood as a constant reminder that the military duties on the home front are often as essential to victory as the more exciting activities to the far-flung battle line.” And in early 1944, as it became obvious that Japanese invasion was no longer a threat, the beach patrols were cut back drastically. Young patrolmen were sent off to combat duty to help the Navy deliver the D-Day invasion force.

At the Tillamook Fairgrounds, 49 of the horses were sold for an average of $117 each. The dogs were often kept by the Coast Guard to be used for sentry duty. And when the war ended, so did the Beach Patrol. Now, you may be thinking to yourself the Sand Pounders were not really a success. I think they were. I realize they never caught an invasion or infiltration force. Had one be dispatched, I believe they would have. They also had a profound effect on morale. The nervous Oregonians felt a lot safer with them on patrol. And there’s this… perhaps after the German U-boats were discovered on the east coast, causing the Beach Patrol to be organized in the first place, the enemies then knew that the Americans were ready for them and no sneak attack or infiltration of enemy spies would make it past our country’s shoreline. The Sand Pounders never saw a single enemy combatant. That’s fortunate for them too, because they were never meant to be a combatant force. I think that in itself is what made them very much a success!