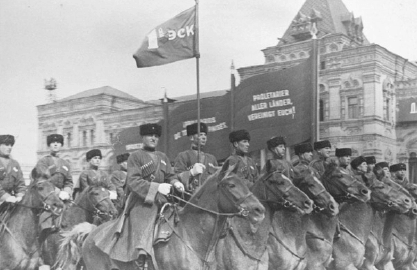 Am I obsessed with horses in war? Well, no, but I am always intrigued by how horses came from a place of necessity to a place of leisure. I see several of my neighbors keeping them as “pets”.  Many take their horses on trail rides or to training sessions, yet some of these horses never leave their owner’s property. So I’m inclined to question, is a horse happier being useful and roaming across the land, or secure in a confined space? And then there’s the fact that at times, they had no choice as to what their purpose was, let alone their owner’s intentions.

The “War to End All Wars” ultimately failed to be such, and the world was at war once again as of September 1, 1939 with the invasion of Poland by Nazi Germany and the subsequent declarations of war on Germany by Britain and France. And yes, horses were still a necessary component of what was to become known as “World War II”. So what changed in this war? Well for one thing, motorization became even more advanced, yet still many areas of battle presented the same problem of mobility as in the Great War.

Therefore horses were once again pressed into service as beasts of burden. As for the Cavalry, most British regular cavalry regiments were mechanized by World War II. The United States retained a single horse cavalry unit stationed in the Philippines, and the German Army retained a single brigade. Many of the other armies had variations of blended horse regiments. Horse-drawn transportation was most important for Germany, as it was lacking in natural oil resources. Infantry and horse-drawn artillery formed the bulk of the German Army throughout the war; only one fifth of the army belonged to mobile panzer and mechanized divisions. Each German infantry division employed thousands of horses and thousands of men taking care of them. In two months, December 1941 and January 1942, the German Army on the Eastern Front lost 179,000 horses.

The Wehrmacht, as Germany named them, was an army on horseback. By 1939 the German Reich possessed 3,800,000 horses to be used in WWII German cavalry while 885,000 were initially
called to the Wehrmacht as saddle, draft, and pack animals. Of these, 435,000 horses were captured from the USSR, France, and Poland. Additional horses were purchased from Hungary, 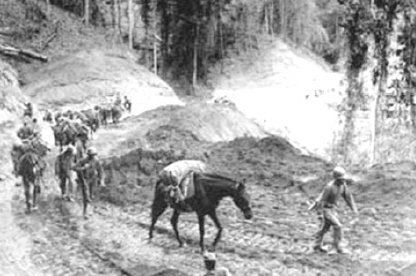 Sometimes in war, doing the right thing matters more than which side you are fighting on. Here is such a case. The Lipizzaner Stallions are known to this day as a famous breed of horses, often referred to as the “Dancing White Stallions”. They are highly trained in classical dressage at the Spanish Riding School of Vienna, which has existed for hundreds of years. The breed was nearly lost in World War II when the Lipizzaner mares were separated from the stud farm of Piber and moved into Czechoslovakia, and then faced with possible destruction at the hands of the starving Russians.

Alois Podhajsky, the director of the Spanish Riding School, made a bold request of the Americans, especially General Patton, to save the horses. Patton, an equestrian Olympian himself, gave his blessings saying, “Get them, make it fast!” With only hours to spare, one of the Army’s last great cavalrymen, American colonel Hank Reed mounted a covert rescue operation. Racing against time, Reed’s small yet determined force of soldiers, aided by several sympathetic Germans, stole across enemy lines to save the horses.

What about horses in Asia on both sides of the conflict? Cavalry provided a major element in the Chinese armies where they primarily used cavalry for patrolling, reconnaissance and direct conflict as mounted infantry with the Japanese forces. Mongolian horses provided the bulk of horse-stock in Chinese armies.

Japan’s environment, historically, did not foster horse breeding practices. One Japanese cavalry unit saw active service outside China, in the Malayan campaign of 1941. The Japanese also made use of Mongolian mounted auxiliaries, recruited in Japanese held territory, to patrol the Soviet and Mongolian borders. In the United States cavalry horses were eventually replaced by the Bantam 4×4 car, soon to be known as the jeep. The only significant engagement of American horsemen in World War II was the defensive action of the Philippine Scouts. The Scouts challenged the  Japanese invaders of Luzon holding off two armoured and two infantry regiments during the invasion of the Philippines. They repel-led a unit of tanks and successfully held ground for the Allied armies’ retreat to Bataan. What would become of the very last combat horse cavalry charge in U.S. Army history occurred at Morong at the west side of Bataan on January 16, 1942, when mostly Filipino troopers of ‘G’ Troop, 26th Cavalry successfully charged their mounts at a far superior Japanese force of armor-supported infantry, surprising and scattering them. This lightly-armed, 27-man force of U.S. Horse Cavalry, under heavy fire, held off the Japanese for several crucial hours.

Stateside there was understandable concern amongst Americans regarding their coast lines. Beach patrols became increasingly important as they upheld three important functions: they looked out for suspicious ships, they reported and prevented any enemy landings, and stopped communications between ships and people on shore. In 1942, in Florida and New York, two Nazi saboteur teams were discovered being put ashore by German U-boats. Off the Oregon Coast, the enemy was already active sinking merchant ships, shelling Fort Stevens and trying to start forest fires with bombs. 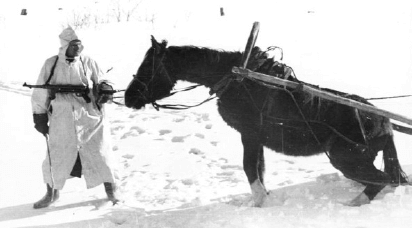 The Sand Pounders patrol was staffed with recruits drawn from both the Midwest and from east of the Cascades. Throughout the early war years, the “Sand Pounders” carried .38 revolvers and Reising M50 submachine guns. They were mounted (one with a backpack radio transmitter) and made their way along the beach during every kind of weather the Oregon Coast would produce, ever on the look-out for Japanese submarines. They initially had only the authority to report suspicious occurrences. However, by late summer in 1943, the governors of Oregon and Washington issued a proclamation giving them full law-enforcement authority. For more information on the “Sand Pounders”, please refrer to my January 2021 article in Horse Tales Magazine.

Thank goodness times have evovlved and mechanization replaced the need for the horse in battle situations. I hope your interest in the horse in war has found some answers in my installment articles. I don’t profess to know everything about a subject, I only want to share what I’ve researched based on my own interests. If you have any feedback or area of interest you would like me to write about, please contact me. My next installment will take place during the Korean War, where I will tell you about a horse that was not a “horse” – she was a Marine!